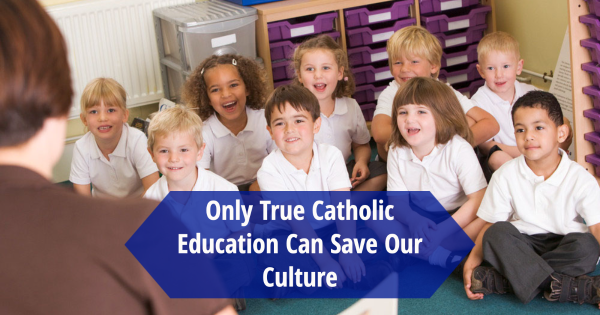 Right now, it may seem a little isolating if you’re a devout Catholic. Although Catholicism is still very much a major denomination of a massive religion, it’s not as dominant in even the Christian sphere as it once was. There are many Protestant denominations, and while that might not be a personal problem for you, there are still differences in beliefs to contend with. Additionally, many Catholics are not necessarily devout or practicing. They may not attend Mass regularly, and perhaps don’t adhere to doctrine as much as you personally do.

If you’re worried about preserving the culture of Catholicism for your children, what you should begin doing is searching for the best Catholic education for them. Fortunately, you have options available for them when they’re young. An estimated 1.5 million children, including 32% four-year-olds and 5% three-year-olds, attended preschool this past year. Many of these preschools were actually private Catholic preschools. Let’s look into what you should do when evaluating a Catholic school for your children.

Most Catholic schools welcome parent tours of their facilities. Typically, a faculty member will take you on your tour, and explain to you what a day in the life would be like for a student. You can get an idea of the level of education your child would receive, and how Catholicism can be incorporated into their daily lives.

If you’re really serious about getting the best Catholic education possible for your children, interview the faculty members. In this day and age, a Catholic school will often employ teachers who have not entered religious life (but are often still practicing Catholics) as well as those that have, like nuns and priests. Often, a Catholic school will be run by an individual who has achieved some upper level status in their religious life. Now is a good time to ask about the specific ways that Catholic culture is folded into their curriculum.

Of course, you still want your child to attend an academically rigorous school. Compare the religious and academic curriculums carefully. The best Catholic education will nourish your child in both aspects.

Finding a good Catholic school can be difficult, but it’s not impossible. Commit yourself to the cause, and you’ll discover a school that fits perfectly.